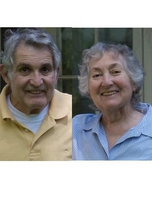 Ronald Ervais A loving husband, father, son, brother and grandfather, Ronald Ervais will be best remembered for his kindness, compassion and always having a great "dad" joke ready to share. Ron was the first member of his family to go to college - and that was an accident. He accompanied his good friend to Temple University to take their entrance exam. The counselor suggested Ron take the test as well since he was waiting for his friend anyway, and he passed with flying colors. He entered Temple where he met the love of his life, Beth Joseph, while both were working in the library. They married in 1957 and soon after moved to Germany while Ron served in the US Army. In 1959, they welcomed their first son Richard; Jill, Susan, Debra and Robert joined the family over the next eight years. While raising the first three children and working full time as an accountant at Curtis Publishing, Ron studied at Temple Law School, graduated in 1964, started his career as a clerk of court, and soon after joined the law firm of Becker & Becker, which was known as Becker, Fryman & Ervais by the time he left to become a sole practitioner many years later. During his 55 years of practicing law, Ron became known as a top-rated Philadelphia attorney, always working to support the disadvantaged and those in need. Ron, a resident of Bala Cynwyd for many decades, passed away on April 29th. Besides his children Richard Ervais (Zander), Jill Ervais (Nigel), Susan Ervais-Bohmiller (Kevin), Debra Stella (Jeffrey), Robert Ervais (Meg), Ron is also survived by his grandchildren Erin (Hannes), Adin, Kelvin and Ethan, his sisters Phyllis Ashcraft and Wilma Ervais, his brother Chuck Landherr and his brother-in-law Dr. Jay H. Joseph. He was predeceased by his beloved Beth and his parents Pauline Polish and Sam Ervais. Ron will be missed by the many who knew, respected and loved him. A graveside service and burial will be held 11:00 a.m. on Monday, May 2nd at Alliance Cemetery, Gershel Avenue, Norma, NJ. Arrangements are under the supervision of Rone Funeral Service, 1110 East Chestnut Avenue, Vineland NJ 08360. Donations in memory of Ron may be made to the Michael J. Fox Foundation for Parkinson's Research or to the charity of one's choice. To send online condolences please visit our website at www.RONEFUNERALSERVICE.com . .