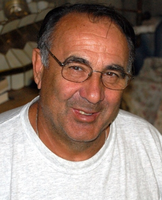 Rone Funeral Service 856-691-4222 John Anthony "Coach" Pierantozzi, 80, of Vineland, NJ passed away on August 11, 2021 at Cooper Hospital in Camden after an extended illness. John was born in Philadelphia to John and Blanche Pierantozzi on November 24, 1940. He was a standout athlete and member of Sacred Heart High School, Class of 1958. He went on to earn his undergraduate degree from Rutgers University in 1962. While at Rutgers he was proud to have worn the uniform of the Scarlet Knights in both JV baseball and football. He later earned his master's degree from Villanova University. He returned to Vineland after graduation from Rutgers and began a teaching career that spanned over 40 years. After five years teaching and coaching at Sacred Heart High School, he moved to Memorial Junior High School and then in 1969 he became a Physical Education teacher at Vineland High School and remained there until his retirement in 2005, serving as department head for the last ten years. John was an icon in the South Jersey sports scene as both a coach and an official. He began his coaching career as the head varsity basketball coach at Sacred Heart, coaching several talented teams with many great players, including his younger brother, Anthony. He then moved to Memorial Junior High where he coached basketball and football, also serving as an assistant with the Vineland High School team. He was elevated to head football coach in 1982 and led The Fighting Clan to seven winning seasons over the next nine years. His teams qualified for the state tournament in six of those nine years and won two CAL champions. They were the only two championships won by Vineland football in the last 43 years. John was proud to be a part of the Vineland-Millville Turkey Day Rivalry, especially when competing with his great friend Tony Surace. He was elected to the South Jersey Chapter of the National Football Foundation Hall of Fame in 2017. He always quick to give credit for his success to his players and his dedicated and loyal assistant coaches. He was also a highly successful golf coach at both Vineland High and St. Augustine Prep. John was known throughout the state as one of the premier basketball officials. His knowledge and demeanor allowed him to bring a calm to even the most intense contests. Over his 50-year career in IAABO, John worked thousands of games all over New Jersey, including eleven state finals. In 2001, he was named NJ State Basketball Referee of the Year, and in 2005, he was inducted into the IAABO Hall of Fame. In 2014, he was the first referee to be inducted into the Carino Basketball Club Hall of Fame. His love for officiating was further enhanced by the comradery he enjoyed with the coaches, athletic directors, and his fellow officials. He was happy to work any level game, from CYO to college ball, especially when he could work with some of his long-time partners. His mentorship of the cadet program has influenced many of the officials on the courts today. John never had a meal that he didn't consider "fantastic" and he loved to tell stories, especially while golfing at Buena Vista, walking the promenade in Sea Isle City, sitting in a South Jersey gymnasium, or solving all the world's problems with "The Bagel Boys" at Bagel U. The family would like to thank all of the friends who literally and figuratively lifted John up over these past few trying months. The heartwarming visits and phone calls from so many who knew and loved Coach through his various commitments, activities, and passion bolstered his spirit tremendously - know that he felt that love and care, that it frequented "made his day". He also loved the City of Vineland and was proud to serve on both the planning and zoning boards even up to his passing. John's life was made complete by his loving family. He is survived by the love of his life, Bunny, his wife of 59 years, and their daughters, Beth Ann Catalana (David) of Vineland and Dr. Barbara Pierantozzi-McCaughey (Richard) of Fallston, MD, with whom he spent so many special events and holidays, especially at their summer home in Sea Isle City. John was "Pop Pop" to his five grandchildren, Taylor Catalana, Jordan Catalana, Garrett Catalana, Collin McCaughey, and Erin McCaughey, of whom he was so proud. He is also survived by his sister Pat Hambleton and brother Anthony Pierantozzi (Joyce) of Cape Cod, MA; sister-in-law Bonnie McLaughlin of Mays Landing; and many nieces and nephews. He is preceded in death by his parents John and Blanche Pierantozzi, in-laws Ottavio and Rena Carletto, and brothers-in-law Richard Hambleton and Bill McLaughlin Funeral home visitation's will be on Sunday evening, August 15th from 5pm to 8pm and again on Monday morning, August 16th from 9am to 10:30am followed by a funeral service at 10:30 am from Rone Funeral Service, 1110 East Chestnut Avenue, Vineland. Final disposition will be private. The funeral home requires everyone to wear a mask regardless of vaccination status. In lieu of flowers donations in memory of John may be made to: The Red and Gray Gridiron Group, P.O. Box 81, Vineland, NJ 08362 ARRANGEMENTS are under the supervision of Rone Funeral Service, 1110 East Chestnut Avenue, Vineland, NJ 08360 To send online condolences please visit our website at www.RONEFUNERALSERVICE.com