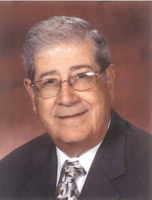 Dino Montagna, 92, a lifelong resident of Vineland passed away on November 8, 2020. Son of the late Fred and Emelia Montagna, he graduated from Vineland High School in 1946. Dino served with the US Army for two years, serving one tour in Korea. Upon returning back to Vineland he earned his pilot's license and flew out of Downstown airport. During the 1950's, Dino was the owner of "The Spot" on Landis Avenue. He worked for Silverman's Men's Store, Jersey Paper and Ritter Finance. Dino studied at the New York Institute of Finance's in 1961, becoming a stockbroker where he specialized in retirement planning, fixed income and estate settlements. He started out with Bache and Company, which after many name changes; it is presently known as Wells Fargo Securities. Dino finally retired after 45 years. He was a member of the Vineland Police Reserves, Jaycees and the Lions Club. He enjoyed golfing, boating, going to the casinos, spending many summers in Sea Isle City, and never missed watching the Phillies or Eagles games. He is survived by his sons, Edward Montagna and Darrin Montagna (Robyn); daughter-in-law, Elizabeth Montagna; grandchildren, Caroline Detetta (Matt), Erica, Emily and Alexa Montagna; nephews, Louis Verderose and Alfred Verderose (Kathy); and his ex-wife, Dolores Bianco; Dino was predeceased by his son, Robert " Bob" Montagna; grandson, Nicholas Montagna; and his sister and brother-in-law, Inez and Joseph Verderose. A funeral home visitation will be held on Saturday, November 28th from 1pm to 3pm followed by a memorial service beginning at 3:00 pm from Rone Funeral Service, 1110 East Chestnut Avenue, Vineland. Burial was held in Sacred Heart Cemetery, Vineland. Due to COVID-19 restrictions everyone is required to wear a mask and to social distance. ARRANGEMENTS are under the supervision of Rone Funeral Service, 1110 East Chestnut Avenue, Vineland, NJ 08360 To send online condolences please visit our website at www.RONEFUNERALSERVICE.com