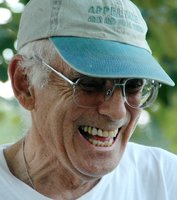 At the sage age of 98, Albert David Appel (born July 5, 1922) has passed away. A man of music, of soil, of mischief, and of family, Albert is known to thousands of creative artists and performers around the globe as the man who gifted their world Appel Farm Arts Camp (which would grow to become Appel Farm Arts and Music Campus). He is survived by his wife Peimin Appel, sister Caroline Schoenbach (Joseph); children Judith Monroe (Doug), Aliza Appel, Toby Appel (Carolyn), and Julius Appel (Diana); step daughter Yi Guo; grandchildren Mischa and Ariel Monroe, Rebecca and Anna Morgan, Jordan and Shelly Appel, and Rochelle Oliver; great-grandchildren Ava, Ryan, Joshua, Nicholas, and Elizabeth Monroe; nieces and nephews Ruth, Hannah, and David Schoenbach, Daniel and David Rostan; and a much loved extended Kivnik and Appel Family. Albert was predeceased by his wife Clare Rostan Appel, and his children Naomi and Jordan who died from Tay-Sachs disease as young children.

If ever there were a person ready to be tasked with meeting 10 decades of life, it was Albert. The son of Harry C. Appel, Romanian born chief cook in WW1, inventor and writer, and Bessie Kivnik, Russian born seamstress, Albert grew up in Philadelphia, PA. As a child, like all good Jewish boys, he studied the violin, and later, the viola and cello. He had a part-time job during high school at Central High in Philadelphia, working in a record store, where he took his pay in classical records. He attended the National Farm School in Doylestown, PA, then got a job at age 22 on Desge Ungar’s farm in Corfu, NY. The Ungars had a little boy named Norbert, who heard Al play the violin and said, “You play the violent.” Albert said Norbert nailed it. He then took a job at the Walter Davis farm in Mullica Hill, New Jersey, and finally started farming his own land in Elmer, NJ.

Albert got a call from a Jewish immigrant family in Vineland one day; they were short a violist for their string quartet...and that is where he met Clare Rostan. They married in 1947 and had six children.

Albert loved to travel. He loved reading. He was delighted by new experiences, and was a lifelong learner. He kept an unabridged dictionary on the piano in the living room in case he came across a new word while reading the New York Times. He learned German to have a private language to speak with Clare, a native of Germany.

Albert loved arguing politics. He was strongly progressive. He and Clare were members of the  National Committee for a Sane Nuclear Policy (SANE) during the Cold War and hosted anti-nuclear activists at chapter meetings in their home. When his daughter, Aliza, expressed fears about the threat of war with Russia, Albert told her, “Don’t count on it. You’d still have to practice every day.” He enjoyed stirring things up. He was a provocateur.

In 1960, guided by a sense of curiosity and grounded in humor and hard work, Albert and Clare transitioned their 176-acre farm and its 20,000 chickens into a thriving summer community focused on the raw talent and emergent curiosity of humans aged 7 to 17: Appel Farm Arts Camp.

“We wanted to change the world and do it through children.” — Albert Appel

Appel Farm has delivered transformative arts and learning with Al and Clare’s vision as a guide, for 60 years. Over the past 40 years, Al has served as Director Emeritus on the Board of Trustees, a fixture of the camp he started, charming and challenging thousands of children to become their best selves, to change the world.

Communities are at their best when founding values are lovingly passed down through generations. As Albert aged and his day-to-day involvement with Appel Farm lessened, his presence was firmly planted in the people and the land. Images of Albert playing cello and riding his tractor were daily reminders of Appel Farm’s commitment to the arts and the land. The traditions that connect sixty years of Appel Farmers are those created by Albert and Clare. They speak to the essential values of creativity, inclusion, equity, and courage. Appel Farm Arts Camp, sixty years from its inception, still shines with Albert and Clare’s fundamental belief in creating a safe and brave home for creative, compassionate people of all backgrounds. Each summer, hundreds of children, teens, and young adults from all walks of life gather together in a world very different from the ones they came from, but very much the model of what we wish the world could be...loving, imaginative, kind, and equitable. At the end of each summer, these people return to their worlds with Appel Farm inside them. They share themselves with those who haven’t been to Appel Farm, spreading the possibilities of a better way of being with those around them. It is almost unreal to think that one man and one woman on a plot of land in rural New Jersey could create a world so special and so life-changing that its impact reaches around the world many times over and will continue to do so for generations. The world is a kinder, more creative place thanks to the legacy of Albert and Clare  Appel.

A graveside service and burial will be held on Friday, August 28, 2020 at 11am in Alliance Cemetery, Norma, New Jersey.

Due to COVID-19 restrictions everyone must wear a mask and social distance.