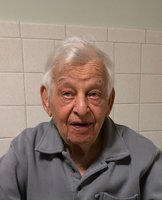 Helmut "Hal" Leeser 96, of Vineland New Jersey passed away on Friday August 30, 2019 at home, surrounded by his loving family. Born in Wanna Eikel, Germany to the late Dr. Julius and Elsie Lesser before being sent to the United States by his parents on a boat with other young children to escape what was to become Natzi Germany. He arrived in the U.S. by himself only able to speak German and a little bit of French. He was taken in by a family that lived in Washington D.C. where he lived in the basement of their home and was required to keep their coal burning stove filled with coal. He was enrolled in public school by that family and quickly learned to speak English. A few years later his mother, father and brother arrived in the U.S. and bought a 23 acre farm in Woodbine, Helmut and his brother raised chickens and started an egg delivery business. Eggs were delivered as far away as New York City on a regular route. Helmut was a founding member of Farmers Co-Op, a group of chicken farmers that banded together to purchase chicken feed in bulk and re-sell to smaller farmers at attractive prices. He met the love of his life Hilde Moses, who was attending secretarial school in N.Y. and they later married in 1949. He brought Hilde to Woodbine to help work on the farm and raised 2 daughters. Helmut did all of the repairs on the farm and built a building to house a small retail electrical supply on the farms property that faced Bellplain Road. The Electrical Supply business seemed more lucrative, and In 1959 he moved the business to 4th and Landis Ave. in Vineland. For 2 years he commuted to Vineland while Hilde tended to the farm. In 1961 he sold the farm and moved the family to Vineland. The Leeser Electrical Supply business grew and in the late 70's the company moved to Chestnut Ave. He invented a patented system known as "The Power Off Alarm", that alerted farmers if power failed in distant chicken coops. in 1987 the business was sold. Helmut started his next venture and joined Taylor Sawyer as a Realtor. Nothing was more important than his family. He became a full time care giver for Hilde when Parkinsons Disease was diagnosed. Helmut enjoyed gardening, he volunteered at Beth Israel Synagogue to handle maintainance items. He loved spending time with his Grand Children and Great Granchildren. Helmut is survived by his 2 daughters, Vivian Lindsay-McKeon and her husband Jim, of Vineland, Carol Fretz and husband Scott of Daytona Beach Florida, Grandsons, Tim Lindsay and wife Devonn, Mark Linsey, Richard Fretz and wife Chayoung of Miami, Florida and Bryan Fretz of Orlando, Florida. Great-grangchildren Sloane Lindsay, and Savannah Lindsay. Hal is predeceased by wife of 64 years Hilde (Moses) Leeser, father and mother, Dr Julius and Elsie Leeser, and brother Ralph Leeser.